Rachel Wolfson is a Los Angeles-based standup comedian. Born in Las Vegas, Nevada, Rachel began her comedy career in LA in 2016 and since then has toured the country with her brand of high humor. Wolfson’s comedic style is a hybrid of crowd work and the dry humor of her day-to-day life. You can see her in February 2022 in the fourth installment of the Jackass franchise “Jackass Forever” as a new cast member. Rachel also performs standup nightly so follow her on social media to catch a show.

Steph Tolev is a Canadian stand-up comedian. She is most noted for her 2019 comedy album I’m Not Well, which received a Juno Award nomination for Comedy Album of the Year at the Juno Awards of 2020. In addition to her solo standup work, Tolev has also performed in the comedy duo LadyStache with Allison Hogg. 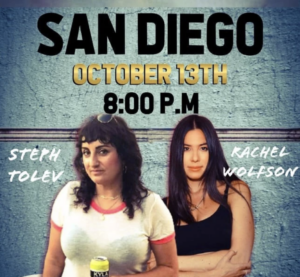 Rachel On “The Punched” Tour – Denver, Colorado
Scroll to top